Leadership - From War-room to Boardroom

Leadership – From War-room to Boardroom

Join us for an evening of stimulating conversation with distinguished speaker Seumas Kerr CBE who will speak about lessons learned over his 40+ year career in both the military and in the boardroom.

Seumas joined the Army for a £5 bet in 1971 after circumnavigating the world in the Merchant Navy and retired as a Major General. Over his 35 year military career, he specialized on managing military capability for operations in the UK and overseas, and the recruitment/retention of troops.

Since leaving the military, Seumas has worked on senior roles leading and delivering on large scale infrastructure projects. He is Managing Director work at The D Group and Strategy International, a proprietary expert and influence network, developed over 25 years.

Venue: W1 to be disclosed to registered guests 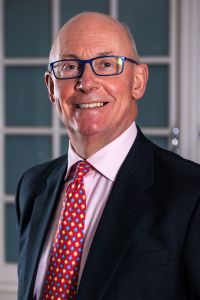 During his 35-year army career, Seumas commanded the 102 Logistic Brigade and the 4th Division, serving during the Troubles in Northern Ireland (1995) for which he was awarded a CBE (Commander of the Most Excellent Order of the British Empire).  He also served during the Iraq War (2002).

After retiring from the military in 2006, Seumas’ civilian career included senior roles such as Chief Operating Officer for Doha Development Company (2006-2007) and Director of Carillion (2007-2018) Carillion Director. In 2018, he became Managing Director of The D Group and Strategy International. His Non-executive director portfolio includes being Strategic Adviser Lockheed Martin.

Beyond BusinessWe are a community of professionals with a passion for personal growth and the finer things in life. Beyond business, we aim to build connections for life.

Do you need more information? Write to us!